We have offered some of our favorite advanced deer hunting tips for your education and use. Please read these and if you have any comments or suggestions then Contact Us.

The average deer hunter with only average knowledge and commitment, over time gets only average results.  Any hunter can bag a small buck once every year or two and might occasionally get lucky, but bringing home that majestic trophy buck with regularity takes commitment and knowledge.  The true deer hunting masters know the following advanced deer hunting tips I am about to share with you.

What's On This Page?

1. Scout Your Area Ahead of Time

This is probably the most important deer hunting tip I can offer. When I say scout your area I don’t mean look for where you are going to sit when the truck drops you off, I mean really get to know the area you are hunting. Some of my most successful hunting seasons were started months before opening day. I would ask permission to go to the lease I was going to hunt on and scout all the areas. I would survey all the available hunting sites and “dry hunt.” Act just like I was hunting but not bring a gun (only a camera) to evaluate which areas had the most deer movement, biggest bucks and highest buck to doe ratios. I would also walk the lease during midday noting the signs of the big bucks, and speaking of the signs of the big bucks: 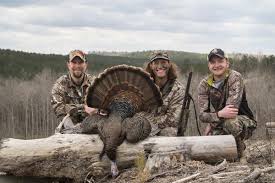 2. Know the Signs of Big Bucks

Knowing what to look for allows you to zero in on the areas where the trophy deer are. Look for tracks. Note the size, quantity and direction of the tracks to indicate the size, quantity and movement patterns of the deer. Look for Scrapes – areas where bucks scratch the ground accompanied with urination to mark territory and attract does, typically below low hanging tree branches at the border of heavy brush during the rut. Look for Rubs – Areas on trees or posts where bucks rub the velvet off their new antlers or mark their territory during rutting season. A “rub line” is a series of rubs, six or more within about a 100 yard space. The rubs are typically on the side of the tree that the buck is traveling form so noting which sides of the trees have rub marks in a rub line gives clues as to the direction of movement. Also scout for and note the size of bedding areas. No signs of bucks means no bucks!

3. Know How Your Firearm Shoots

Know the ballistics of the caliber and cartridge you are using. Realize and be able to adjust for the distance you are shooting; the rise on short shoots and the fall on longer shoots. Practice judging distance and if all possible walk off the probable sighting areas ahead of time so if you are making a 400 yard shot you know it is 400 yards and you know the drop your bullet will realize at that distance and be able to adjust.

If you master the aim and ballistic characteristics of your deer hunting rifle, you can be more concerned with exact shot placement. A lot of other hunters don’t agree with me on my preference, but I am a “neck shooter.” A shot properly placed anywhere on the neck brings down your deer, right then, every time. If your shot lands lower on the neck you have severed the carotid arteries, high on the neck and the spinal column is breached, hit the center of the neck and you get a combination of these deadly effects.  From a broadside, front or rear quarter angle, or head-on angle the neck target is as large as the traditional “behind the lower shoulder” target and much more effective. I don’t recommend full rear shot attempts at all unless you are looking at a trophy buck you just can’t pass up; cleaning a deer that has been shot up the rectum is not a pleasant task to say the least. Always make wise shooting decisions; making a fast, efficient kill is be the goal of all advanced deer hunters.

Without being able to go into too much depth here, the last or our advanced deer hunting tips involves attractants (natural food plots, salt licks/mineral blocks, feeders, and flavored blocks) , deer calls, and rattling techniques. The food related attractants require previous preparation. Planting food plots takes time ant attention much as any gardening does. Continuous feeding of an area should start weeks or even months ahead of the hunting season so the deer get used to the location and timing of their free meals. Calling or rattling up bucks is a hit and miss technique that normally only works during a rut. I have had bucks come to my rattling slowly and cautiously out of curiosity when they were not in rut, but typically when it works well they tend to come rushing. I have almost been run over by bucks when rattling in the field, so if you become proficient at this technique be prepared for quick action. And proficiency is required and often slowly learned. To effectively mimic the call or re-creation of realistic fighting sounds of deer has a learning curve, but can become very effective once learned.

Every deer hunter wishes he or she could display a trophy buck at some time during their hunting career, some of us are not happy unless we bag at least one monster every season. If you are going to join the ranks of the elite hunters, then you need to know the advanced deer hunting tips the elite hunters know.