Radar detectors are electronic devices used to help motorists detect police radars from a distance, allowing the driver to adapt their driving speed before detection. There are a number of detection systems available, and they use different methods.
Police radar has also evolved and is designed to beat detection methods. So, this is a cat and mouse technology war, where scanners and detectors are trying to outdo each other constantly. Detectors are legal in most states. However, there is another kind of detector is a detector scrambler. These not only detect they also try to scramble the scanner, which is illegal in just about every state in the US and country around the world.

Here is a quick guide describing radar types, so you understand the language:

As you can see, the subject of radar detection is really easy to understand. I will also let you into a trade secret, radar and its detectors have been around for over 50 years, so this is a well-hashed industry. This review will give you the latest and best radar detectors on the market. I also go into more detail and give you some tips and insider information after the review section.

Did you know that the radar guns and detectors are termed civilian electronic warfare? As in all wars, technology evolves exponentially, and that is why we have so many advanced early warning systems.

What's On This Page?

Let’s jump in and take a look at the best radar detectors:

The XRS 9370 is a comprehensive radar detector that provides instant-on radar detection as well as a full range of radar and laser detection capabilities. This is one of the best detection models because it covers all the frequencies used in the US and Canada, this means you get Laser, VG-2 and Spectre coverage.

The unit also provides highway and urban modes, it is suction cup mountable and comes with a coiled power cord. Another great feature is that this unit includes the Ku-band, while not used much, still gives you peace of mind when driving all over the US.

The SRS 9370 features include:

My take: This unit is truly affordable and formidable unit, and I would take this one over most of the others.

The Whistler XTR-335 detector is a great budget-friendly radar detector. This unit covers all the radar and laser frequencies found in the US and also has a proprietary instant-on POP function. This model covers VG-2 and provides a VG-2 shrouding feature, so you don’t need to turn it off while driving.

The unit comes with a 360o RF and laser band coverage, three city modes that include a high pick up the lens, a faint or dull mode, and a stay ready mode. Each one is providing different levels of sensor dulling for reducing false activation.

My take: The Whistler XTR-335 is a compact, generic and easy radar to install and operate. It provides complete protection from all laser and radar bands. However, it has one downside, it doesn’t detect Spectre, which today is a must.

Bottom line: this is an inexpensive, simple unit for general family outing use. 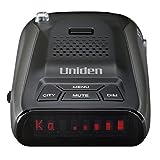 If its budget-controlled perfection that you are looking for, then It’s time to talk serious business. Uniden is a globally acclaimed company and brand; it produces some of the best devices on the market. So here is an insider tip, the Uniden DFR5 is perhaps one of the best radar detectors on the market. This little baby provides excellent sensory conditions for the most elusive Specter units and provides excellent instant-on coverage too.

This is a GPS compatible model, and I can start by saying that the OLED display was really easy to read even during the sunniest days. The Spectre detection performance is now honed to a T and is one of the leaders of the pack in Spectre sensing.

However, take into account that Specter upgrades constantly change the balance of power, so the later R1 and 3 models will prove better in this instance. This DFR 5 is well shielded from Spectre detection, but you will still need to turn it off when warned. In regard to radar detection, this unit is hands-down a winner. It detects every known radar transmitter as well as shields perfectly against all of them.

The DFR5 is a great little instant-on detector and easily detects these pesky units from a good distance.

Bottom line: While the DFR5 is an older model, it is exceptional for its price and is the perfect budget – efficiency ratio unit to buy, covering you on every band including Spectre I.

The Whistler CR80 is a compact radar and laser detector that provides great performance results all the time. This unit covers every RF bandwidth used for speed detection and also detects all the latest laser frequencies including the Laser Ally, Laser Atlanta Stealth mode, and LTI Truspeed S. This Whistler unit is very sensitive it instant-on (POP) had will give you an immediate alert from the first beep it detects, which is usually a safe distance away to react.

This unit comes with the Whistler standard three city modes, each one designed to perform under different muted sensors to reduced false alarms.

Bottom line: The CFR 80 is a versatile and sensitive radar unit that is affordable and provides some of the best performance with K, Ka-band, and police lasers that more expensive units provide. 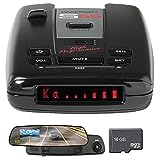 This is one of the best models on the market today, it’s Escort’s Passport S55 High Performance Radar and Laser detector. The S55 includes a built in720p video and audio webcam which you position on your windshield and use as a dashcam, basically hiding its real intentions.

This model provides coverage for all bandwidths and includes an advanced auto-threat detector that can filter out real from fake.

The system comes with Escort’s traffic signal rejection script, so it also filters out interstate traffic sensors. The Escort app includes a real time traffic network to protect you from potential threats reported by other drivers. It also includes Escort’s long-range detector mode “v-tuned”. The kit includes a 16GB memory stick for your dashcam recordings.

Bottom line: The Escort S55 is perhaps the best little unit, and I was very happy with the extra dashcam option.

There are three mounting categories of a radar detector, these are:

A car detector is basically a unit that can read incoming wavelengths of data, irrespective of the source. The wavelength band is what is being detected, and a good detector will be able to read such a wavelength form a long distance. This provides the driver with a chance to reduce speed before the detector picks up the vehicle in its sensors. Detectors can pick up wavelengths from a 360o making them “foolproof” to conventional police radar scanners.

The modes you will find in the best detectors include:

Did you know that the best detectors have a high selectivity range? This allows you to differentiate between radar and laser wavelengths.

VG-2 is an old radar standard this was once common, it is not completely obsolete, but technology has advanced. Make sure your detector includes VG-2.
Spectre is a more advanced technology; this is an oscillating system, where the wavelength transmitted oscillates between frequencies which makes detection harder. Only the best radar detectors can defeat a Specter.

It’s important that you consider investing in a unit that shields your detector from VG-2 and Spectre, this way you won’t need to turn the unit off when approaching the operator. Shielding is legal so long as it doesn’t jam the unit sending out the signal.

There are two methods your detector will warn you about an oncoming radar or LiDAR trap. The most common is an audio signal, the other is a flashing light. The flashing light is a great addition to have at night, especially if your passengers are sleeping. You can turn off the audio and let them sleep. However, if your unit is hidden, this will be an issue.

Instant on means that you were hit by a radar that was off until you approached it visually, then it turned on. In most instances this is unbeatable, and as such, you have been detected and measured. However, if there was a driver ahead of you, you still have a chance, and the best detectors will have a K-Band sensor to warn you of an instant on impression.

The onset of apps such as Waze and Google maps, together with built-in GPS in your car or mobile phone is also usable, although accuracy remains to be an issue. Law enforcement can track your GPS movement and gauge the speed at which you are moving.

Today GPS apps come with speed sensing and tell you what tour speed is in relation to the speed limit. Some apps will warn you to slow down.

The best radar detectors come with GPS capability, and they also have a memory feature for red-light cameras as well as speed trap locations.

Did you know that the best radar detectors are mobile interactive? You can access them with your smartphone, even have on hidden and use your smartphone as the warning unit. The extra GPS capabilities of your smartphone combined with the radar's software make for a very formidable symbiosis.

As explained at the beginning of this review, reader detection is all about sensing a transmitted wavelength signal and warning the driver. It's that simple. The bottom line is that this is not rocket science, its basic radio frequency management, and we have known about RF for over a century.

Radar detectors detect wavelengths, and these wavelengths are banded together, hence the terminology wavelength band. In the US, these bands include X-band, K-band, Ka-band, Ka wide-band, and Ka super wide-band, which transmit over the 10.5 and 36 gigahertz range. In Europe, you will also find the 13.45 GHz Ku Band, which is not used much in the US.

Unlike radar, where an RF band is detected, even when oscillating, light works differently. It is still emitted using a wavelength, but it comes as pulses of light and light are exponentially faster than RF. This means that detecting a LiDAR requires much more accurate and sensitive equipment.

The best detectors will include a LiDAR sensor since this makes the unit much more accurate than just a basic RF unit. Car speeds are measured by LiDAR at around 1,000 feet (1/5 mile, however, Many LiDARS come with a 1.5-mile range, covering two lanes of traffic.