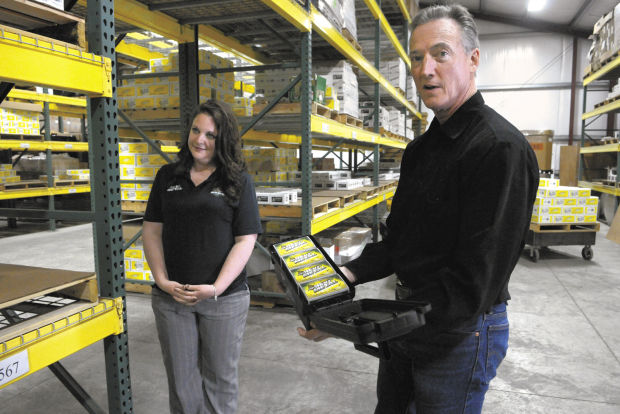 Being able to take a product from concept to the marketplace in as few as three months has been a key to success for Environ Metal, whose foundation over the last 15 years has been developing high-quality, high-density shotgun shells under the brand name Hevi-Shot.

Owned by a  group of mid-valley investors, Environ Metal has been based in Sweet Home since 2000.

CEO Ralph Nauman and Kelly Sorensen, vice president of marketing, say the company has been faced with numerous economic challenges over the years — including a 10-fold increase in the price of tungsten, used to make the shot that differentiates their shells from others made of lead or steel.

But through it all, the company has not only persevered, it has thrived.

“We’re on our third or fourth business plan,” Nauman said. “About 2005, prices went up and we were afraid we might close, but we learned that we can figure things out and made the necessary changes.”

Sorensen added that the company is focused on “our mission, which is to innovate and create new products.”

Nauman said 86 percent of tungsten resources are in China, so it’s almost a closed marketplace when it comes to raw materials pricing.

It has been their commitment to meeting the needs of its customers from coast-to-coast that has driven Environ Metal to constantly revamp its product line and to grow from 11 manufacturing line employees to 16.

The company’s newest product, Hevi-Duty, is an example of meeting a consumer need, while thinking out of the box.

Nauman said the number of registered handgun owners has grown by 37 million in recent years, and many are women who want protection in their homes.

“We are known for high-density shot, but in this case, we realized there is a growing market for home protection,” Nauman said. “But, you don’t want the shot to travel a long distance and possibly endanger someone else.”

From that need, Environ Metal developed shot that is made from compressed metal powder that dissipates once it strikes a hard surface, such as concrete or rock.

Hevi-Duty’s individual pellets can easily be crushed with a pair of pliers.

Another new product that has been well-received in the market place is Hevi-Steel, shotgun shells that feature half metal and half tungsten shot, which greatly reduces production and retail costs.

To carry those shells, Environ Metal teamed up with Plano products — the same company that has manufactured fishing tackle boxes for decades — to develop a Sports Pack. The product is a water-resistant plastic box with a handle that holds up to four boxes of shotgun shells.

“The Sports Pack was introduced in June and has sold like gangbusters,” Sorensen said.

Environ Metal customers are nationwide, such as Cabela’s and Bass Pro Shops, but include numerous Pacific Northwest outlets such as Bi-Mart, Dick’s and Sportsman’s Warehouse.

Sorensen said the four-person administrative staff answers all phone calls, and it was from conversations with customers that led to the company to develop its own line of shotgun barrel choke tubes made from aircraft-grade stainless steel.

Many of those tubes — which attach to the end of shotgun barrels to change shot patterns — are manufactured by Viper Northwest of Albany.

In addition to its sales growth, Environ Metal is proud to have added a new 7,200-square-foot warehouse last year, which increased warehouse capacity by about 50 percent.

Nauman said he hopes the company will be able to announce a major breakthrough in bullet technology within the next year.

“It’s something we’ve worked on for 14 years,” Nauman said.

Include safety as part of the spring turkey hunting preparation
March 18, 2020