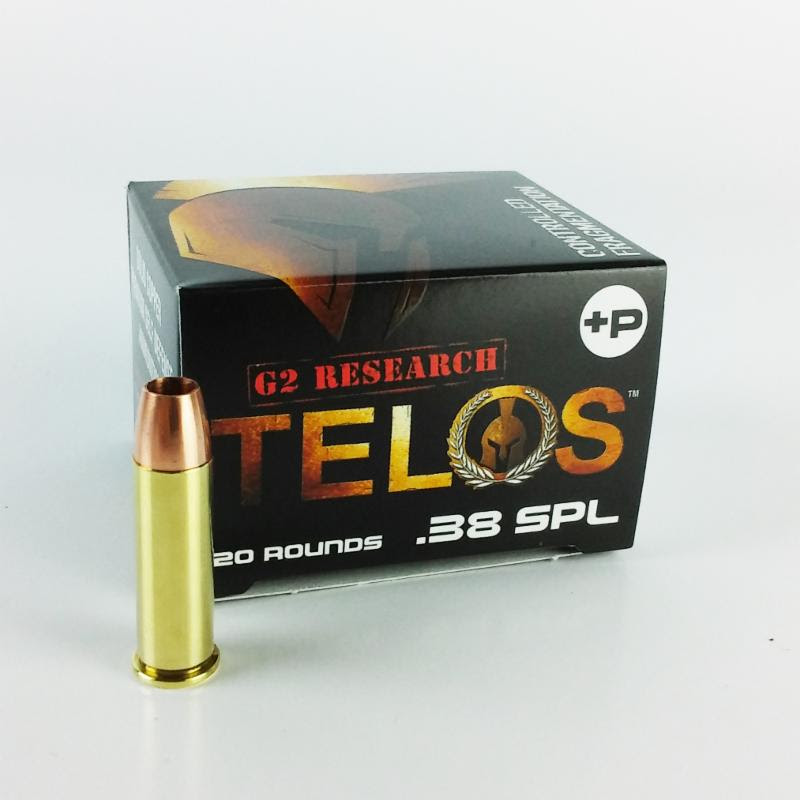 Both .38 Special and 9mm Parabellum rounds have been underrated over the last decade when compared with other newer handgun rounds. "That will change with these new G2 Research +P Telos rounds. These new rounds are specifically designed and loaded to stop fights--quickly!"--Chris Nix, VP Sales & Marketing.
There is good news:
The Telos bullet is CNC manufactured using a pure copper slug. It has a huge internally segmented hollow-point. Once the hollow point fills with fluid it literally flies apart in  controlled-fragmentation releasing six-copper petals.
These fragments spread inside the target for several inches causing pain, increasing blood loss thus lowering blood pressure. The base of the bullet continues to travel forward for additional penetration (10+-inches). The Telos bullet is designed to stay inside the target  releasing all of its energy, not into an innocent bystander on the other side of the target."
Specifications:

My "real world" evaluation of the new Telos .38 Special and 9mm rounds took place at an outdoor range with 2 targets set up at 7 yards from my shooting position and 2 yards apart.

I consider all hits within the 5" circle acceptable for this type of one-hand shooting.

I used a S&W 342PD for the .38 Special evaluation and a Kahr CM9 for the 9mm evaluation. These guns are +P rated, are small and light and I'm very familiar with both of them.

First up was the S&W 342PD and the 105 grain, 1170 fps Telos rounds. With the gun at my side, I raised it to eye level, fired 2 rounds quickly at target #1, then swinging slightly right, I fired 2 rounds at target #2, paused for maybe 2-3 seconds and fired the final round at target #2. All rounds were grouped nicely within the 5" circle in both targets. A sliver dollar would have covered the hits in both.

I should emphasize that while both of these guns have short barrels, they are both exceptionally accurate and I have fired many rounds though both of them. While the Telos round are +P they have very light bullets, traveling very fast and recoil was easily manageable.

After this evaluation, I put a number of additional rounds down range with both guns. I had no malfunctions of any kind with either gun. In fact, had I not run out of ammo, I'd have shot a lot more with both of them.

Looking at the information on the G2 Research site, I have no doubt that these rounds would indeed "stop fights quickly". My main interest was their accuracy and I found that to be excellent with both.

Here’s Why David Chipman Is A Terrible Choice for ATF Director
April 16, 2021